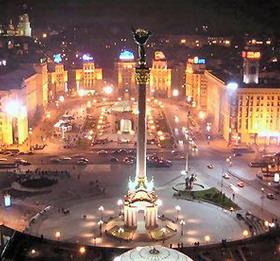 Independence Square is the city's main square and one of the most popular places for meetings. On weekends the traffic is blocked on Khreschatyk Street and visitors can enjoy a pleasant walk down the middle of the street. Ukraine's independence movement, from Moscow, began in this square when hundreds of university students went on a hunger strike in 1989, which led to the demise of the Communist Party in Ukraine. At that time stood a huge red marble statue of Lenin. When the statue was torn down, many of Kiev's citizens took part in its demolition

The reconstruction of Independence Square was finished in 2002 and profoundly changed the city's image. During the reconstruction the Lyads'ky Gate was found, underground, on the square. It was the same gate which was assaulted by Batu Khan in the 13th century, having lost any hope to force his way through the Golden Gate. He managed to destroy the Gate enough to allow his numerous troops to break into the city. You will see the gate as a backdrop to fountains, which gather people around. If you have a chance, visit the underground shopping center "Globus" right under the square. 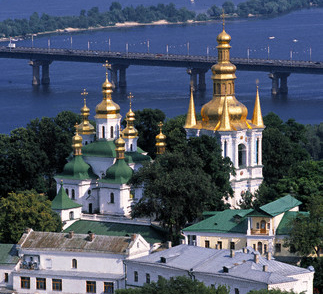 The Dnipro Hills are dominated by the greatest monument of Kiev, the Pecherska Lavra, built almost nine centuries ago. A complex of churches, masterpieces of architecture by themselves, has been a holy place of worship for devout Christians. Famous for its catacombs with the saints' relics, Lavra is also called the Monastery of Caves. Museum collections of miniatures and church treasures amaze visitors from all over the world 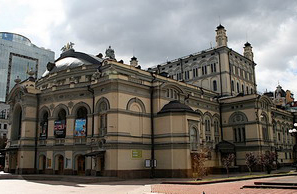 The theater is located in downtown Kiev, near the Khreschatyk Street. The beautiful exterior of the building is supported by the majestic interior design. Much of the theater's creative efforts are concentrated on productions of classical Ukrainian and Russian operas and ballets. Professional actors, creative lighting and bright decorations leave the most memorable impression about Ukraine's dramatic art. 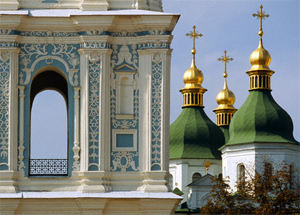 St. Sophia's 13 beautiful golden domes nicely blend with the city skyline. The grandiose ensemble was built by Prince Yaroslav the Wise in the XI century in commemoration of the victory over the Pecheneg tribe. The cathedral became a major cultural and political center of Kievan Rus and a site for receiving ambassadors from many countries. St. Sophia is famous for its outstanding mosaics and frescoes dating to the eleventh century. 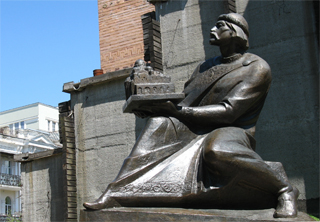 This fortified wall, defining the limits of the city and serving as a protective barrier from invaders in the past centuries, dates back to 1037, the reign of Prince Yaroslav the Wise. The place was restored to its present condition in 1983, and it now serves as the Golden Gate historical museum. The structure is located in downtown Kiev, two blocks from the National Opera House, juse outside of the Zoloti Vorota metro station. 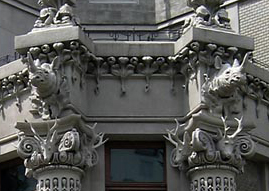 One of the most interesting buildings in Kiev was built by the well known architect Horodetsky, as a private residence in 1902. The walls and roof of the structure are decorated with intricate sculptural ornaments of mythological and hunting themes. The building is considered to be one of the most fascinating architectural creations in Kiev. The building is located on a quite and peaceful part of the downtown area at 10 Bankova Street. 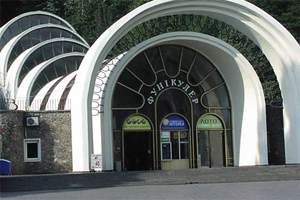 The funicular (cable car) was built in 1905 and until now it offers quick, exciting and inexpensive rides from the Podil (Lower City) up to Mykhailivska Ploscha (Upper City). The ride is short (about two minutes), but it is worth seeing a magnificent panorama of Kiev and the Dnipro River that uncovers from the funicular. 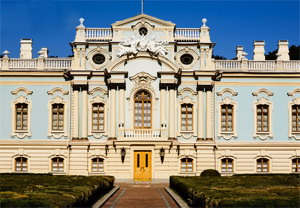 The gorgeous blue and cream palace was designed by Bartholomew Rastrelli and was built under the supervision of the Russian architect Ivan Michurin. The palace is located on top of a hill in a beautiful park overlooking the Dnipro river. The magnificent building was used as a Kiev residence of the Tsar's family. Today the palace is used for official state receptions such as presidential meetings. 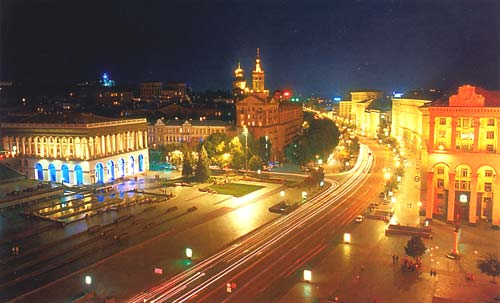 The center of the city is Khreschatyk Street, which follows the bottom of a small valley, laced on the sides with beautiful, terraced gardens interspersed with tall, modern office and apartment buildings. Greenery of the gardens, trees lining the street, squares that intersect all, combined with the variegated colors of brick, red and gray granite, and decorative ceramic tiles give Khreschatyk an attractive and colorful portrayal, much admired by Kiev's inhabitants.